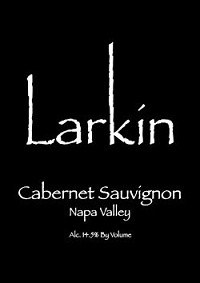 Larkin Cabernet Sauvignon is a true wine gem from Napa with an unusual provenance. Perhaps Napa's answer to the "garagistes" of Bordeaux, Sean Larkin is a Scot trained as a sheet metal worker who pursued his dream to become a winemaker in the most prestigious wine region in America. In 1999, he bought one-half ton of grapes and began the process of winemaking, choosing a St Helena winery to custom crush and make his wine. Two years later Sean released his first 48 cases of Cabernet Franc as the sole owner and employee of Larkin Wines. Remarkably, the wine scored an impressive 91 points from Robert Parker! This 2006 Cabernet Sauvignon also received a 91-point rating from Parker. It will provide drinking pleasure through 2025 for those with the patience to cellar a few bottles! Parker calls Larkin "a somewhat undiscovered source of terrific wines." Our definition of a wine gem!

Larkin Cabernet Sauvignon is 85% Cabernet Sauvignon blended in the Bordeaux style with 11% Merlot and 4% Petit Verdot. It was aged for 20 months in French oak, 50% new. Full-bodied and well structured, it offers rich aromas and flavors of blackberry, creme de cassis, dark chocolate and espresso layered with spicy oak for added complexity. Sweet tannins infused with ripe berries create a lush, velvety texture. The wine is long and elegant on the finish.