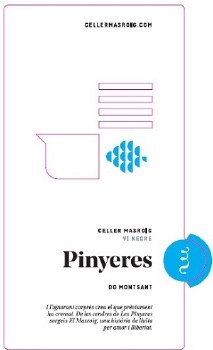 Celler el Masroig Castell de les Pinyeres is a red blend of 50% Grenache, 40% Carignan and 10% Cabernet Sauvignon, from one of our favorite wineries, Celler el Masroig, in the Montsant region of northeast Spain. The Montsant region received DO status in 2001 and lies west of Barcelona bordering on the north of Priorat. Celler el Masroig was founded in 1917 as the Cooperativa of El Masroig. It is an association of grape and olive oil producers with approximately 300 members who are associated owners of the company. The winemaker is the young and dynamic Carles Escolar, who strongly believes in the potential of the Montsant appellation. Jay Miller of Wine Advocate praised the winery in April 2008: "Celler El Masroig, located in the up-and-coming region of Montsant, is a role model for how a cooperative ought to function. The winery keeps only the best grapes and sells off the rest to other producers, some of whom are quite well known. The wines are very fairly priced and offer an excellent price to quality ratio from the top to the bottom of the portfolio." Vinous Media rated this vintage 90 points. Castell de les Pinyeres is a beautiful Spanish red wine gem!

Celler el Masroig Castell de les Pinyeres is medium in body with a deep ruby color. It offers a beautiful bouquet of red fruits, blueberries, chocolate, mineral notes and spicy oak. On the palate it is elegant, silky and well balanced with soft tannins and rich flavors of blackberry, cassis, black cherry and cocoa. It was aged for 13 months in French and American oak barrels, then for another 12 months in stainless steel. The wine is smooth and pleasing on the finish.