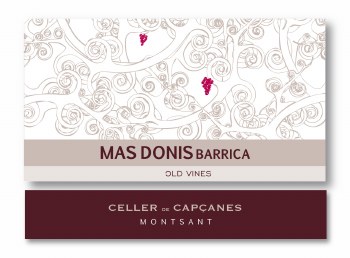 Capcanes Mas Donis Barrica is a superb red wine gem of 85% Garnacha and 15% Syrah from old vines in the Montsant region of northeast Spain. The Montsant region received DO status in 2001 and lies west of Barcelona bordering on the north of Priorat. The property is situated in the village of Capçanes and served for several years as the village cooperative. In the 1990's, the co-op began making kosher wines for the Jewish population of Barcelona and began to attract a greater level of interest. Importer Eric Solomon of European Cellars was quite impressed and bought a 3-hectare vineyard of 100-year-old vines and is himself a member of the cooperative. Donis is one of the Capcanes estates high up in the Llaberia hills southwest of Barcelona where old vines grow in small plots. Robert Parker rated this wine 94 points, writing, "I am blown away by what's in the bottle, but you be the judge."

Capcanes Mas Donis is medium-full in body with a deep ruby color. It offers a beautiful nose of raspberries, cherries, roses, mineral notes and spicy oak. On the palate it is rich, vibrant and well balanced with soft tannins and rich flavors of red fruits. It was aged for 9 months in French and American oak barrels. The finish is long and pleasing.