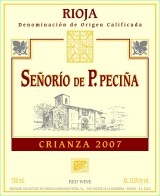 Pecino Rioja Crianza is our favorite new Spanish red wine gem! Since the turn of the century, Traditional Rioja has undergone an incredible renaissance in the hearts and minds of American wine lovers. The problem today is the relative scarcity of Bodegas who produce Rioja in the traditional way. There are really only a handful who are firmly committed to the 'old school' tenets of Traditional Rioja. This includes long aging in mostly neutral American oak, regular open-air racking by hand (called trasiego), and then further aging in bottle, often well beyond the specifications required by the DO. Fortunately, Bodegas Hermanos de Peciña is firmly planted in the old school camp. This Pecina Rioja Crianza is a beautiful example of traditional Rioja at its best!

Varietal Notes: 95% Tempranillo, 3% Graciano, 2% Garnacha
Organic: Practicing
Vineyard: The vineyards are all estate owned and located in the San Vicente zone of Rioja Alta. Depending on the vintage the grapes come from a combination of 3 vineyards. El Codo with vines on average 30 years, El Llano with vines on average 35 years and Iscorta with vines on average of 60 years.
Orientation: El Codo is a very steep vineyard beginning at 475m and rising quickly to 525m with orientation to the North. El Llano is at 500m with orientation North/North West. Iscorta is also at 500m with an orientation to the North.
Soil: Calcareous Clay. El Codo also has very large rocks and pebbles.
Viticulture: Practicing organics and sustainability, all estate owned vineyards, They work in a very natural way. All pruning and harvest is done by hand. El Codo and El Llano are trellised and cordon system. Iscorta is bush pruned.
Vinification: The grapes are destemmed and crushed and fermented naturally with wild yeast in stainless steel tanks.
Aging: Aged in used American oak for 2 years and hand racked 4 times during that aging (every 6 months). The wine then ages for at least an additional 2 years in bottle before being released on the market. The wine is bottled unfined and unfiltered.
Notes: This is the flagship wine of the estate. The Crianza is an amazing example of the complexity, elegance and structure of great traditionally made Rioja.