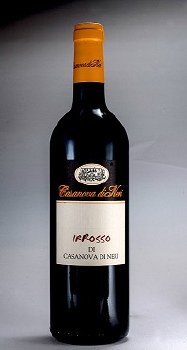 Casanova di Neri Irrosso Toscana Rosso is a beautiful red wine gem from Tuscany. Casanova di Neri was established in 1971 when Giovanni Neri acquired a large estate within Montalcino. In 1991, his son Giacomo took over direction of the estate and winemaking. Vineyard acquisition has been a continuing goal for the Neris, and the estate has grown to include seven different vineyards in various parts of the denomination, totaling 156 acres of vines along with forested tracts, arable fields, and 50 acres of olive trees. The vineyards have been planted or replanted mostly with cuttings propagated from old Sangiovese vines in the Cerretalto vineyard that produced distinctive, high-quality fruit. Farming is organic (not certified.)

"Sangiovese is the primary grape with a bit of Cabernet Sauvignon and Petit Verdot. The aromas are enticing with rich black fruits, berry, plum, currant and mulberry. Serious flavors of blackberry black plum, mulberry with a touch of cherry and strawberry with a touch of bay leaf are followed by tight, but fine tannins. Enjoy it with simply prepared veal or beef or a hard cheese like Parmigiano-Reggiano." - Rebecca Murphy, Wine Review Online, 90 points!

Casanova di Neri Irrosso (or IrRosso) is Casanova di Neri's most recent creation. It is made primarily from relatively young Brunello (Sangiovese) grapes but does not qualify for the Brunello or Rosso di Montalcino denomination because it also contains some Colorino grapes, traditional of Chianti, and the Bordeaux varieties Cabernet Sauvignon and Petit Verdot. This wine is the most approachable of Neri's wines at an early stage of development, but it can still age well. It was aged in oak barrels for 12-15 months.