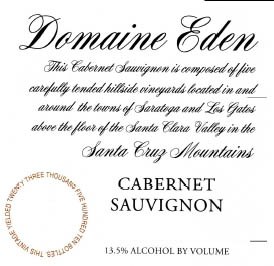 While the Mount Eden Estate is a singular voice, the Domaine is a chorus. Complex, given the five varieties in the cepage, this Cabernet has aromas of briary currant, sage, mint and sweet oak. Less tannins and acidity on the palate than is evident in the Estate, there is an earlier window of enjoyable drinking. The lots are fermented separately using natural fermentations and French oak. Aging this wine to maturity for two years, no fining or filtration is conducted prior to bottling, just like the Estate regimen. The ultimate goal is a classic Santa Cruz Mountain Cabernet reflecting Domaine Eden's mid-appellation region.

Vinous / Antonio Galloni - "The 2014 Cabernet Sauvignon packs a serious punch. A rush of black cherry, plum, herb, graphite and smoke fleshes out in an exuberant, fruit-driven Cabernet Sauvignon that offers considerable near and medium term appeal. Although not especially complex, the 2014 has a joyous radiance to it that will make it impossible to resist upon release."-91 points!