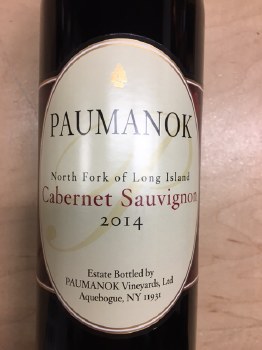 Paumanok Cabernet Sauvignon is a beautiful red wine gem from the North Fork of Long Island in New York. Family owner and winemaker Kareem Massoud visited Wine Gems in January 2016 to taste a number of his wines, and this Cabernet Sauvignon was a standout from a very impressive portfolio. This new 2014 vintage has not yet been reviewed, but Mark Squires for Robert Parker's Wine Advocate rated the 2013 vintage 90 points. We like this one even better!

Paumanok Cabernet Sauvignon is a beautiful food wine. Enjoy it over the next 4-6 years with poultry, game and mild cheeses.