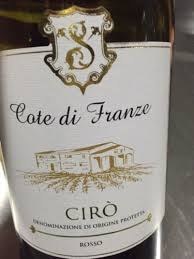 Cote di Franze Ciro is a beautiful red wine gem from Calabria, the "toe" of the boot-shaped peninsula of southern Italy. It is 100% Gaglioppo from 30-year-old bushvines in Ciro' Marina, dry farmed and hand-pruned, planted in loose, sandy soil rich in iron over volcanic chalk. Calabria's best-known wine is Ciro', which grows in low hills along the Ionian coast between the ancient Greek cities of Sybaris and Kroton (Sibari and Crotone today). Local legend has it that Ciro' descended directly from Krimisa, the wine Calabrian athletes drank to celebrate victory in an early Olympiad. Italian wine critic Luca Gardini scored this wine 90 points!

Francesco and Vincenzo Scilanga carry on the family tradition of winemaking in Ciro that dates back several centuries. Grapes are handpicked at the end of September and fermented into red wine in stainless steel vats at controlled temperature with selected yeasts; maceration lasts for 2 weeks. The wine ages for 12 months in French oak tonneaux.