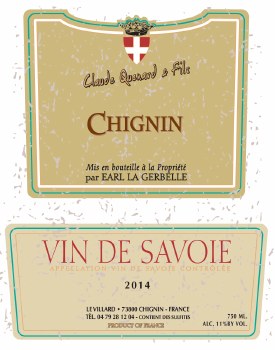 Claude Quenard Chignin is 100% Jacquère from a 6-hectare plot. Natural yeast fermentations in temperature-controlled stainless-steel tanks (including malolactic). Aged on the fine lees for six to eight months in stainless steel. Organic.

In the foothills of the Alps, southwest of Chambery, you find the tiny village of Chignin, one of the Cru of the Vin de Savoie: 200 hectares of vineyards located on sunny slopes with south-southwest exposure and an average altitude of 350 meters. The vineyards are protected from the north wind by the surrounding mountains, Mont Saint Michel, Mont Ronjoux and Saint Anthelme. The soil here is stony scree (aka talus- a slope formed by an accumulation of broken rock debris, as at the base of a cliff or other high place).

Claude Quenard's family purchased their farm and winery from the Monks of Chartreux in 1906. It was polyculture until the early 1980's when they decided to increase the vineyards to five hectares and focus on wine, at which point they gave up cereal farming. Claude, the grandson of the first non-monk owner, had the farm at the time. His sons, Guy and André, joined the winery in the late 80s/early 90s, at which point they increased their vineyards to 14 hectares.

Locally, Chignin is often paired with fondue or raclette, but it’s easy to imagine it alongside grilled fish, asparagus, or on its own as an aperitif. It’s balanced with a remarkable minerality, highlighted by citrus, floral, and hazelnut notes on the palate with a slightly smoky finish.