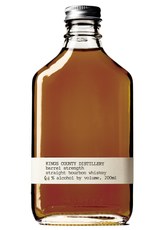 Kings County barrel strength straight bourbon is pulled from some of the oldest barrel stocks that we have in inventory now: bourbon barrels aged between two and four years. Because these barrels are stronger and richer, we decided to bottle this release at barrel strength, which varies by batch usually between 115 and 124 proof.

“Of all the craft distillers in the nation, none makes bourbon more delicious than Kings County”— Wine and Spirits Magazine 2015 re: Barrel Strength (Spirit of the Year). ACSA: Gold medal 2016, Best in Category Bourbon.