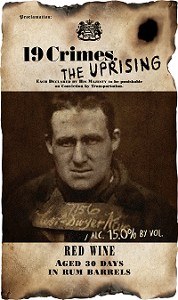 Nineteen crimes turned criminals into colonists. Upon conviction, British rogues, guilty of at least one of the 19 crimes, were sentenced to live in Australia, rather than death. For the rough-hewn prisoners who made it to shore, a new world awaited. As pioneers in a frontier penal colony, they forged a new country and new lives, brick by brick. This wine is borne of the rules they broke and the culture they built. And like our legendary rogues, it’s a taste that’ll live forever in infamy.

The men on our labels are not those of fiction. They were flesh and blood. Criminals and scholars. In history, they share a bond - receiving “punishment by transportation.” It could have shattered their spirits. It didn’t. Today, we toast those men and the principles they lived by.