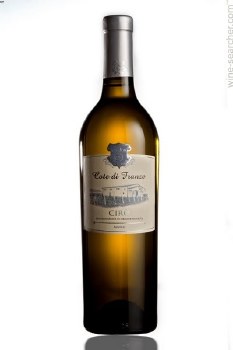 Cote di Franze Ciro Bianco is a beautiful white wine gem from Calabria, the "toe" of the boot-shaped peninsula of southern Italy. It is 100% Greco Bianco, a variety thought to have come from Greece. Calabria's best-known wine is Ciro', which grows in low hills along the Ionian coast between the ancient Greek cities of Sybaris and Kroton (Sibari and Crotone today). Local legend has it that Ciro' descended directly from Krimisa, the wine Calabrian athletes drank to celebrate victory in an early Olympiad. Francesco and Vincenzo Scilanga carry on the family tradition of winemaking in Ciro that dates back several centuries.

Cote di Franze Ciro Bianco shows bright acidity and a beautiful nose and palate of citrus, mineral and floral notes. Enjoy it over the next 3-4 years with grilled branzino, roast chicken, pasta, and grilled red peppers.