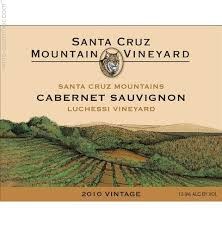 Santa Cruz Mountain Vineyard Cabernet Sauvignon Luchessi Vineyard is a single-vineyard Cab from the Santa Cruz Mountains appellation. The Luchessi Vineyard is a perfect example of a rough and rugged mountain vineyard that produces wine with tons of character. It was planted in 1981 on a very steep hillside on the east side of the Santa Cruz Mountains a little northeast of Montebello Ridge. It is an old-fashioned vineyard with head-trained vines and no trellis wires. The site is too steep to have wires, as tractors need to be able to cultivate either direction depending on the slope.

This vineyard just looks like it has to make wine of character, and it does. Year after year there is an incredible depth of Cabernet Sauvignon fruit, especially on the aroma. Usually hearty Cabs like this don't show much fruit in the aroma for the first 3 to 5 years, but for some reason this site makes wine that leaps out of the glass when young. The wine has many layers once it wakes up, including complexities of anise, vanilla and some chaparral herbs. This is a rugged and feisty Cabernet Sauvignon for hearty meals, and it will continue to age gracefully in the cellar for many years, easily going for two to three decades if properly cellared.

Forget anything you thought you knew about this variety from a Napa perspective. The Santa Cruz Mountains version is deeper, juicier, and rougher in the right way to really go great with food.