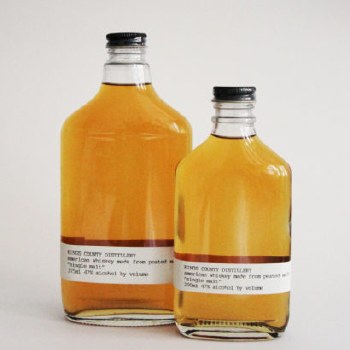 Kings County Distillery’s Single Malt Whiskey is made almost entirely like a single malt scotch—except that instead of being made in Scotland, it’s made here in Brooklyn. Kings County Distillery’s single malt whiskey is open-fermented off the grain from malted barley (with a hint of peat) sourced from England and Scotland. The whiskey is twice distilled in traditional Scottish pot stills, then aged in our own used bourbon barrels anywhere from 1.5 to 4 years. With a higher post-cask strength than our American-style offerings, this whiskey warranted a higher bottling strength—47%—and so it is more potent than its palate would suggest. Dry and sophisticated, it is an elegant whiskey with notes of honey, hay, burnt orange peel, and peat. It is a perfect addition to your shelves.