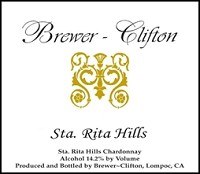 Brewer-Clifton Chardonnay Santa Rita Hills is a superb Chardonnay from the Santa Rita Hills appellation. This bottling is comprised of 100% estate chardonnay from three vineyards within the AVA. 3D, Machado and Acin all contribute to the wine. Only neutral Sirugue barrels are used for 12-18 months. Whole Cluster pressed chardonnay. The winery does not promote or prohibit malolactic fermentation, allowing wine to be in balance, bright and elegant. In the words of Founder/Winemaker Greg Brewer, "We are committed to a finite stretch of land within the Sta. Rita Hills appellation even before we mapped and defined it some twenty years ago. From our first working moments here in the early 1990's, we have been lured and seduced by this magnificent wine growing area. The pure crystalline sand soils under our feet and the salty air blowing continuously from the rugged nearby sea set an immediate hook from which we could never escape."

"The 2015 Chardonnay Sta. Rita Hills checks in as a blend of the 3D, Acin and Machado Vineyards, and it's brought up identically to the single vineyards. In addition, there's really no barrel selection made, so don't think of this cuvee as a second wine. Like the Hapgood, it's a seriously rich, unctuous beauty that offers notes of buttered citrus rind, candied lemons, honeycomb and hints of minerality. Deep, rich and thrillingly textured, it's certainly the smart value play of the lineup as it's half the price, but more than half the wine."-Jeb Dunnuck, August 2017, 95 points!

Wine Advocate 92 points - "The 2015 Chardonnay is reared in a neutral barrel, with no malolactic fermentation. It has a full-on expressive nose of fresh grapefruit, white peaches and clotted cream with hints of fresh ginger and nutmeg. Medium to full-bodied, the spicy citrus fruit explodes in the mouth with tons of energy and a racy backbone, finishing long and savory."-Lisa Perrotti-Brown, September 2017

Wine Spectator 92 points - "Refined and powerful, with concentrated flavors of green apple, ripe citrus and mineral that are deftly supported by fresh acidity. Hints of dried savory herbs show on the finish. Drink now through 2022. 3,500 cases made." -KM. June 2017