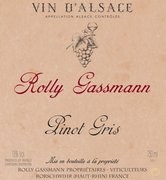 Rolly Gassmann Pinot Gris sustains the tone of excellence achieved by Rolly Gassmann over the decades. In the northeast of France near the German border, Alsace is actually the driest wine region of France, a valley tucked between the eastern side of the Vosges Mountains and the Rhine River. The Rolly Gassmann estate was created in 1967 when Marie-Thérèse Rolly married Louis Gassmann, but their family trees in this region go back to the 17th century. The Rolly Gassmann vineyards lie just north of Colmar and the cellar is in the tiny village of Rorschwihr. Rolly Gassmann converted to the biodynamic philosophy of winemaking in 1997. Wines are only released when the winery feels they have aged appropriately in bottle, sometimes as many as 20 years after bottling. In the case of the 2010 Pinot Gris, we are fortunate to have this beautiful white wine gem now!

The 2010 vintage Pinot Gris was not reviewed by Wine Advocate or Wine Spectator, but the subsequent 2012 vintage scored 89 and 90 points, respectively. That Wine Advocate review describes the wine perfectly:

"The 2012 Pinot Gris shows a clear, deep, intense and ripe fruit aroma marked by fresh lemons and crushed stones. Round, fruit-intense and sappy on the palate where the delicate sweetness is spiked with salty minerals and followed by a long, intense and stringent finish. An excellent, full-bodied Pinot Gris which has much more character than the simple name is indicating." Drink 2015-2022-Stephan Reinhardt, Wine Advocate, 89 points!