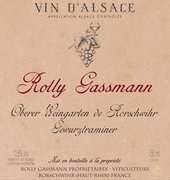 Rolly Gassmann Gewurztraminer Oberer Weingarten de Rorschwihr sets the tone of excellence achieved by Rolly Gassmann in the 2011 vintage. In the northeast of France near the German border, Alsace is actually the driest wine region of France, a valley tucked between the eastern side of the Vosges Mountains and the Rhine River. The Rolly Gassmann estate was created in 1967 when Marie-Thérèse Rolly married Louis Gassmann, but their family trees in this region go back to the 17th century. The Rolly Gassmann vineyards lie just north of Colmar and the cellar is in the tiny village of Rorschwihr. Rolly Gassmann converted to the biodynamic philosophy of winemaking in 1997. Wines are only released when the winery feels they have aged appropriately in bottle, sometimes as many as 20 years after bottling.

"Candied orange rind, papaya, cinnamon and black pepper on the pungent nose of Rolly Gassmann's 2011 Gewurztraminer Oberer Weingarten persist on a palate possessed of surprising primary juiciness of citrus fruits - suggestive of pink grapefruit and orange. But then, this isn't the first time I've been surprised - so perhaps I shouldn't be - by the freshness and vivacity conveyed in a Gewurztraminer medium by this Muschelkalk site. The spicy, juicy, energetically sustained finish suggests a wine unlikely to flag much if at all before 2025." Drink 2014-2025-David Schildknecht, Wine Advocate, 91 points!