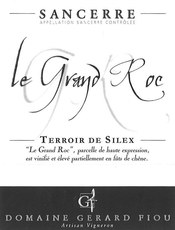 Gerard Fiou Sancerre Le Grand Roc is a superb expression of Sauvignon Blanc from the famous Loire appellation of Sancerre. Domaine Gerard Fiou is a small family domaine in the east of the Sancerre appellation in the town of Saint Satur. There are only a handful of producers here and the soil is unique in that it has a high percentage of silex (or flint) which typically is identified with Pouilly Fume (just across the Loire river). The domaine now has 9.80 hectares and they are in the process of converting to certified organic viticulture. With these special silex soils and older vineyards (average 60 years-old), the wines have an intense mineral and savory expression and are distinctly Sancerre.

Wine Spectator rated the 2015 vintage of Gerard Fiou Sancerre Le Grand Roc 93 points! "Shows the powerfully ripe profile of this vintage, with a large core of lemon and grapefruit gelée mixed with honeysuckle, white peach and gooseberry notes. A strong flinty edge keeps all the elements harnessed on the finish, while a light whiff of paraffin glides through. Drink now through 2021. 750 cases made."-JM, 93 points!

This cuvée comes from 62-year-old Sauvignon Blanc vines with a south-southwest exposure, on a soil composed of silica and clay soil. Part of the wine is vinified in cement and "inox" tanks, and another part in new oak barrels; the wine is aged for 10 months on the fine lees, with bâtonnage.