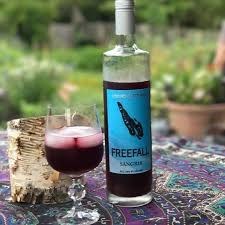 Made in the Hudson Valley, this bold blend of Cabernet Sauvignon, Merlot, and Baco Noir is made entirely from New York grapes. Infused with fruits and jacked with spirits, this is a sangria that is made for the adventurous.

In 2011, when Christine Kelley (aka CK) began running the cafe at Skydive the Ranch in Gardiner, NY, she had no idea the force this beverage would become. The café, source of outstanding food and pleasant company by day, became a bustling speakeasy at night. Amidst raucous laughter, music and dancing, CK brewed up large batches of her sangria for guests to enjoy after hours, only to have it disappear within minutes. She couldn’t make it fast enough, and skydivers couldn’t get enough of it.

Since then, CK and Tom, the creators of Freefall Sangria, have shared cases and cases at events throughout the US. It has touched the lips of friends across the pond and to the west. They serve the chilled elixir with a playful warning: sip it slow, and sip it long; just know it will jump up and bite you if you aren’t careful.

Tom, recognizing the increasing demand, was encouraged to expand the operation. So they made the leap. Tom and CK purchased a large property, taking production from the basement of their old farmhouse to the base of the Shawangunk Mountains. Here is where the next chapter begins.

CK and Tom’s sangria is becoming an after hours staple at dropzones, backyard BBQ’s and late-night parties, bringing the magic of Freefall to sangria lovers everywhere. It is euphoric. It is smooth and powerful. It is strength and lightness of being all at once.

It is Liquid Altitude.