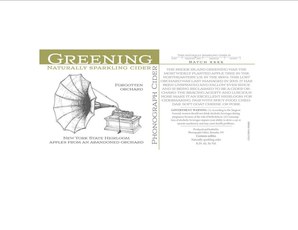 Excellent fruit is the most essential element of great cider. Upstate New York has had apple orchards for hundreds of years and the glacial soils and temperate climate is well-suited to growing apples with great flavor. The cool nights, especially in the autumn, allow the apples to ripen slowly and to keep the great flavors that they developed throughout the growing season. Notable American cider apple varieties originating in Upstate NY include Golden Russet and Northern Spy. Phonograph works with orchards located in Upstate New York, between the Fingerlakes and Lake Ontario. These include orchards of Rhode Island Greening that haven’t been harvested in nearly 20 years, as well as Northern Spy and Ida Red. Some of these orchards have become so mature that the understory is a forest of grasses and wildflowers. Farmstand orchards all over New York have been pressing this fruit for cider for generations and have kept these heirloom varieties alive and well. The apples used have character and elegance that is more than tangible and intensified in the cider. All of the Phonograph cider is pressed on a rack and cloth press that has been in use for nearly 100 years. It is powered by a tractor and is being run by the fourth generation of the Gansz family to press at this same location. Phonograph cider comes from a traditional winemaking approach with some contemporary cidermaking techniques woven in. The fruit is pressed fresh in the fall at peak ripeness and fermented in the Fingerlakes town of Romulus during the cool autumn and winter. The dry ciders are then immediately fermented and the Medium ciders undergo an ice-cider technique by freezing some of the unfermented juice before primary fermentation to produce a finished cider that is balanced both in acidity and residual apple sugar. No sugar is added. The first fermentation is stopped with cold temperatures and filtering and a second fermentation then produces sparkling ciders with exceptional clarity and expression.

The Greenings (50% of the apples) come from an orchard planted around 80 years ago, and last used commercially 15 years ago. The other apples are from a farmstand orchard about 15 miles away still run by the 70+ year-old orchardist. The Greening orchard was certified organic when it was last managed and is still fully organic, though nobody certifies it anymore because there is no commercial benefit to. For the Greening, before the first fermentation, the brix was raised with the addition of pressed juice which was cryo-concentrated (like for making ice-cider) where you freeze the must and then partially thaw it to about 30-40 Brix). This allows for the alcohol to get above 7 for stability and offers natural residual sugars from the apple must to be present in the bottle. The fermentation kicks off and goes until it is most of the way to the desired alcohol level, is stopped, then filtered, then put into a Charmat tank where another fermentation is started to create the carbonation (same was Prosecco is made). That secondary fermentation is stopped with cold-crashing and is then filtered and bottled/kegged.