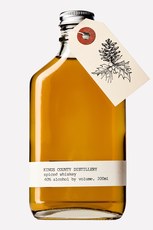 Our Winter Spice Whiskey is this year's fall seasonal release. We created an infusion of baking spices associated with mulled cider, hot toddies, and winter holidays. Using cinnamon, cardamom, nutmeg, allspice, black peppercorns, clove, and star anise, this whiskey is a bold but balanced answer to some of the cinnamon-flavored offerings from bigger distilleries that aim for a broader audience. Perfect for cocktails that like a spicy cinnamon kick, this whiskey is designed for crisp, cool weather.