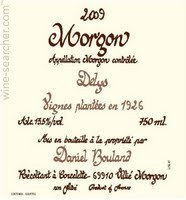 Daniel Bouland Morgon Les Delys is a gorgeous expression of Gamay from the excellent 2017 vintage in Beaujolais. Daniel Bouland is a great producer of old-fashioned Morgon. From less than 7 hectares of old vines in the Douby, Côte de Py, and Delys, lieux of Morgon, plus small parcels in Chiroubles and Cote de Brouilly, he makes wines that can age 20 years, and are comparable to fine Côte de Nuits Burgundies. His Corcellette Morgon vineyard is 60-75 year-old vines. De Lys (between Corcellette and Ville Morgon) was planted in 1926. In 2014 he acquired another old-vines parcel - Bellevue, on schiste and granite. All his grapes are hand-harvested and vinified with full clusters in order to extract all the organoleptic qualities and bottled unfiltered.

DeLys is sable soil and one of the best situated in the appellation. Daniel's parcel was planted in 1926 and yields are sometimes as low as 15 hl/ha.

"From vines planted in sandy soils in 1926, the 2017 Morgon Les Delys Vieilles Vignes is a stunning wine that ranks as one of the vintage's qualitative peaks, wafting from the glass with a kaleidoscopic bouquet of cassis, plums, cured meats, dark chocolate, wood smoke and rich soil tones. On the palate, it's full-bodied, multidimensional and immensely concentrated, with fine tannins, tangy acids and an incredibly long finish. The sheer density of old vine extract in this bottling is more reminiscent of a young Clape Cornas than it is of most contemporary Beaujolais, but the winemaking here is utterly classical and there's nothing forced about it. The most reserved of Bouland's wines, the 2017 Delys will require at least 2 or 3 years of bottle age and reward a full 10."-William Kelley, Wine Advocate, 96 points!