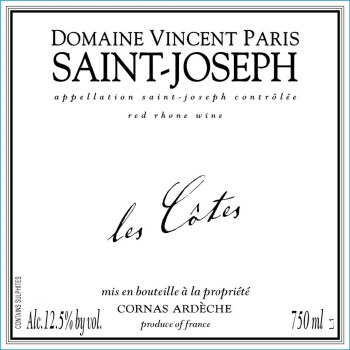 Vincent Paris Saint-Joseph Les Cotes is a beautiful red wine gem from vineyards in the village of Ardoix, about 30 km north of Cornas, in the central part of this northern Rhone appellation. Vincent Paris, whose first vintage was 1997, is as shy as his wines are bold. In his early 30's, he has retro sideburns, but not much else in the Cornas appellation's new star is "retro". Vincent's uncle is Robert Michel, one of Cornas' finest growers. He made his two first wines with his uncle then, seeking autonomy, rented facilities for the vinification of his most recent wines. He is in the process of building his own winemaking facilities with a courtyard that holds his apricot plantation. He prunes to only four bunches of grapes per vine (the norm is between five and seven) which concentrates the vines' growing power and cuts down on the need for green harvests. His St Joseph red is made from 10-and 20-year-old vines and is vinified half in used barrel and half in tank, aged in oak barrels for up to 12 months. 100% Syrah, practicing organic.

"The 2018 Saint Joseph Les Cotes is forward, plush and silky, with oodles of ripe cherries. It's full-bodied but does show hints of granitic restraint and a briny freshness that comes to the fore on the lengthy finish. While approachable young, it's not just a simple fruit bomb, there's some substance beyond the flesh. Drink 2019-2027."-Joe Czerwinski, Wine Advocate, 91 points!