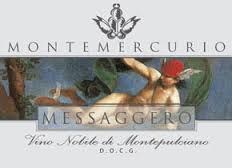 Vinous 94+ points! "A wine of real character and personality, the 2010 Vino Nobile di Montepulciano Messaggero is terrific. Sweet tobacco, cedar, menthol, wild herbs and dried cherry notes hit the palate. Powerful and quite tannic, the 2010 is going to need at least a few years to come into its own. The 2010 will thrill readers who appreciate classic expressions of Sangiovese."-Antonio Galloni, Vinous, 94+ points!

Montemercurio Messaggero Vino Nobile di Montepulciano is a beautiful red wine from the Montepulciano region of Tuscany. Montemercurio is the ancient name of the town of Montepulciano, named for Mercurio, the messenger of the Greek gods. The Montemercurio vineyards sit on ideal SW exposures at altitudes up to 450 meters. On 7 hectares of land a little more than 30k bottles are produced annually. The current owners are Paola Luciani and her son Marco Anselmi but Marco says the entire project is a dedication to his dear grandfather, Nonno Damo Anselmi.

Montemercurio Messaggero Vino Nobile di Montepulciano is 100% Sangiovese estate grown and hand harvested at altitudes of over 1500 feet above sea level, where the cooling night time temperature change provides the complexity for this elegant wine. After careful grape selection a long maceration is followed with at least 18 months in large Slovenian oak barrels (40 hl) and then 6 months in 10 hl barrels. Messaggero will spend at least 12 months in the bottle before it is released. It is deep ruby red in color with a bouquet of ripe plum, dark cherries and subtle hints of spices and mint. Full-bodied with moderate acidity and silky tannins, this red offers flavors of blackberry and plum with well-integrated sweet oak. The finish is rich, long and polished.