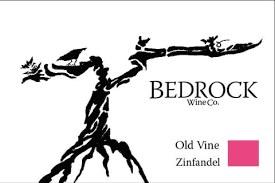 Bedrock Old Vine Zinfandel is a beautiful red wine gem from one of the top winemakers in California. Morgan Twain-Peterson is the owner/winemaker of Bedrock Wine Company in Sonoma. In 2017 Morgan passed the Master of Wine examination, becoming one of just forty-five MWs residing in the United States and one of two California winemakers with the qualification.

"Though its core still revolves around the Sonoma Valley appellation (Bedrock Vineyard, Monte Rosso, and Casa Santinamaria Vineyard), we have become geographically more adventurous due to the addition of a few pretty amazing vineyards. The first of these is Nervo Ranch in Alexander Valley with its steep, decomposed shale soils. The second is Sodini Ranch on Limerick Lane in the Russian River Valley that Bedrock Wine Co. happily farms. The last is the amazing Stampede Vineyard in the Clements Hills AVA of Lodi: own-rooted on granitic sands and planted in 1919, it is a star in the making under the new ownership of the Perlegos family. There are also bits of Papera Ranch, Pagani Ranch, and Lorenzo's in the blend."-Bedrock Wine Company. Aged in all French oak, 12% new.