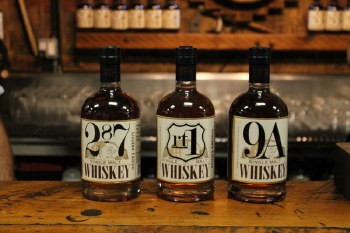 One summer afternoon, in a moment of clarity fueled by a pint of locally brewed Captain Lawrence beer, our master distiller asked himself a question; "Beer is made from grain, whiskey is made from grain...what if we made whiskey from beer made by a brewery?" When we brought the idea to Captain Lawrence’s owner, Scott Vacarro, he sent us thousands of gallons of his Freshchester Pale Ale to distill into whiskey and so 287 Single Malt Whiskey was born. Named after the highway that connects StilltheOne Distillery and the Captain Lawrence Brewery, 287 Single Malt Whiskey is carefully distilled to capture the nuance of the malted barley and then matured in new oak barrels.

Now the 287 concept has led to the creation of Rt 1 Single Malt Whiskey, distilled from a local Belgian ale. Smooth and delicious with beautiful floral notes.