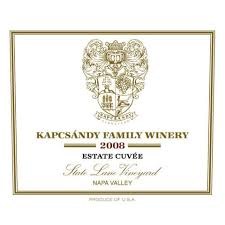 "The 2008 Estate Cuvee State Lane Vineyard (68% Cabernet Sauvignon, 22% Merlot and the rest Cabernet Franc and Petit Verdot) is spectacular. In fact, I rated it the same as I did the 2007. A dense ruby/purple hue is followed by a gorgeous bouquet of espresso roast, chocolate, blackberries and black fruits. Full-bodied with extraordinary elegance as well as tremendous texture, intensity and length, this singular wine should drink well for two decades. For those who complain that California wines are too alcoholic, every one of the Kapcsandy wines is under 14.6% alcohol.

As I have written many times over the last several years, the Kapcsandy estate, which is essentially the old Beringer State Lane Vineyard in Yountville resurrected under the perfectionist philosophy of Lou Kapcsandy, his son, Louis, and wife, Bobbi, is about as good a news story as one can find in Napa Valley. The vineyard, planted with very tight spacing and a north/south exposition by Helen Turley and John Wetlaufer, is impressive in its own right. Yet what the Kapcsandys have done with the fruit from that vineyard with assistance from their consultant, the Pauillac-born Denis Malbec, is nothing short of remarkable. Moreover, they have done it in less than a decade, which proves that fortunes can be made quickly, provided there are three ingredients – incredibly hard work, lots of talent, and a super terroir. These can indeed propel an estate to the stratosphere in less than a decade. Drink 2010-2030."--Robert M. Parker, Jr, Wine Advocate. 97 points!