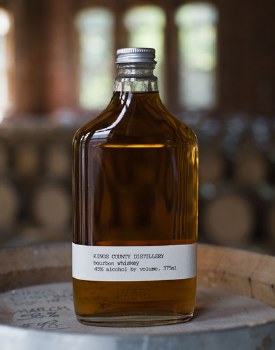 Kings County Distillery’s Straight Bourbon is made from New York State organic corn and malted barley from the U.K., is twice distilled in copper pot stills and then aged in new charred oak barrels. It is characterized by a rich aroma of fresh corn, balanced with the sweet caramelized oak sap from small barrels. It has a very strong sweet base with flavors of vanilla and caramel, a deep molasses taste to the middle notes, and leaves a smooth finish with hints of cinnamon and autumn spices. Aged for at least two years, this bourbon is a precocious whiskey, surprisingly robust for its age.