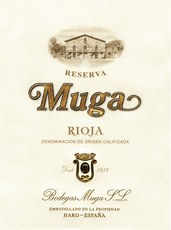 Founded in 1932 by husband and wife team - Isaac Muga and Aurora Caño, the Muga Family is synonymous with tradition and the skill of an artisan. Three generations have now contributed to the history of this Rioja cellar.

Bodegas Muga is the only winery left in Spain that uses only oak throughout the entire process of elaboration of their wines. Muga has its own cooperage and directly importing American and French oak makes this possible. The winery manufactures about 2,000 barrels each year. The wine is racked every four months by gravity and the use of candle to detect sediment. Fining is done by egg whites. The process takes over two months as the raft of egg whites sink to the bottom of the vat. This is a very expensive technique, but it succeeds in giving Muga reds a distinctive velvety texture.

The vineyards are nestled in the foot hills of the Montes Obarenes in the heart of Rioja Alta. The winery owns approximately 620 acres of Garnacha, Tempranillo, Viura, and Malvasia vineyards, and it controls an additional 370 acres from other growers.

Muga Rioja Reserva is ruby-red with glints of brick-red and a medium-high depth of colour. Dense legs which provide you with a sequence of patterns around the sides of the glass. Initially you can find notes of red fruit aromas such as blackberries and reminders of spices. This is all well balanced by smoked aromas from its time in wood which had received a light-to-medium toasting. A subtle vanilla pod aroma coming through with roast coffee nuances. A smooth, mellow attack, with tannins wrapping the sides of the mouth with hints of menthol. In the finish the interesting lingering persistence is worthy of note.