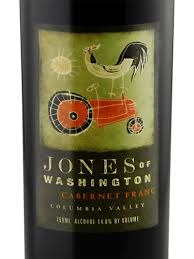 Jones of Washington Cabernet Franc is a beautiful red wine gem from the Columbia Valley of Washington. Jones of Washington is a family-owned winery, with vineyards located along the Columbia River in central Washington state. The Jones Family owns several vineyards in the Quincy and Mattawa areas and co-owns a Mattawa bulk wine producer, J&S Crushing, which was started in 2008. The family also continues to harvest many row crops. Jack Jones' sons, Jeff and Greg, manage the family vineyards, while daughters Megan and Maureen help out with special events. Jack's efforts were recognized in the spring of 2012 as Jones of Washington was selected as the Washington Winery of the Year by Wine Press Northwest Magazine out of nearly 700 operating wineries at the time.

Jones of Washington Cab Franc is youthful-looking in the glass with a deep ruby color with magenta highlights at the rim. The nose is fantastically seductive - increasingly so after a simple 30-minute decanting - with red currant, dried cherry, and raspberry jam that moves into earthy tones of wild mushroom, fresh rosemary, roasted red pepper and underlying hints of Christmas spice. The medium bodied palate is balanced with acidity, while the tannins have a grippy quality to them. On the palate the flavors mimic the nose with red fruit and earthy tones with the addition of Bing cherry, red plum, sweet pepper, raspberry leaf tea and fresh tilled soil. It was aged in a combination of new and used French oak for 16 months.

Jones of Washington Cabernet Franc is a beautiful food wine. Enjoy it over the next 4-6 years with roasted meats, stews, and BBQ. It's also a perfect match for your Thanksgiving feast!