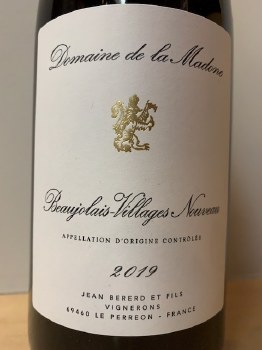 Domaine de la Madone Beaujolais-Villages Nouveau is a wonderful wine to enjoy the Gamay varietal in celebration of the new harvest. Olivier and Katerina Bererd, proprietors of Domaine de la Madone, farm this family vineyard where many of their low-yielding Gamay vines are 100 years old. Madone consistently finishes at the top of the Nouveau rankings in Wine Spectator, the New York Times and other major publications. It has received critical acclaim from Robert Parker, who called the winery an "Outstanding Producer" awarded 5 Stars in his Wine Buyer's Guide.

Located in Le Perreon, in the superior hilly northern part of the Beaujolais region, the vineyards of Madone are contiguous to the crus of Brouilly, Beaujolais' southernmost cru, though their altitude is even higher. This altitude yields wines of greater complexity and depth than nearly any other wines designated Beaujolais-Villages. Brothers Olivier and Bruno farm their vineyards of low-yielding old vines using integrated pest management. They harvest by hand and not until the grapes have achieved optimal ripeness. This vintage in Beaujolais was a long growing season with high quality, and Madone wines are known for their unusual longevity.

Domaine de la Madone Beaujolais-Villages Nouveau is deep ruby-purple in color, medium in body, with soft, round tannins. It offers a beautiful nose and palate of cherries, raspberries, violets and spice. With well-balanced fruit, acidity and tannins, the wine shows ripe red fruit on the lasting finish.