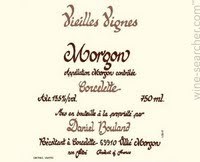 Daniel Bouland Morgon Corcelette Vieilles Vignes is a gorgeous expression of Gamay from the excellent 2017 vintage in Beaujolais. Daniel Bouland is a great producer of old-fashioned Morgon. From less than 7 hectares of old vines in the Douby, Côte de Py, and Delys, lieux of Morgon, plus small parcels in Chiroubles and Cote de Brouilly, he makes wines that can age 20 years, and are comparable to fine Côte de Nuits Burgundies. His Corcellette Morgon vineyard is 60-75 year-old vines. De Lys (between Corcellette and Ville Morgon) was planted in 1926. In 2014 he acquired another old-vines parcel - Bellevue, on schiste and granite. All his grapes are hand-harvested and vinified with full clusters in order to extract all the organoleptic qualities and bottled unfiltered.

"The 2017 Morgon Corcelette Vieilles Vignes (4) is brilliant, unfurling in the glass with notes of wild plums, cherries and cassis, complemented by savory aromas of grilled meat and loamy soil. On the palate, it's full-bodied, deep and layered, with a slightly tauter, more tensile profile than the Corcelette that matured in foudre #7, as well as marginally more concentration. While the differences between the two bottlings aren't sufficient to merit a divergence of scores, #7 is the purist's choice and seemingly the best-adapted to sustained bottle age: it was the bottling I purchased for my own cellar."-William Kelley, Wine Advocate, 94 points!