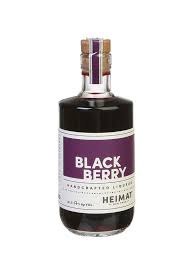 Heimat is an exciting new line of handcrafted liqueurs made in Mamaroneck, NY. Heimat New York (pronounced HI-maht) was founded by Ute Londrigan, who was born and raised in Germany and grew up amidst all the wonderful traditions that Germany has to offer. Fruit liqueurs were, and still are, commonplace in the area. Ute's grandmother made them herself from fruit in her backyard for the family's own use, typically after the afternoon's traditional coffee and cake ("Kaffeeklatsch"). Ute dabbled with her liqueurs over the years but it wasn't until she and her family moved to New York - with the wide variety of fresh fruits at her doorstep, friendly and engaging farmers, and friends who appreciated the taste and authenticity - did the idea really take off. After two years of planning, licensing, creating contacts with farmers, and a whole lot of support from her friends and family, Ute opened the doors to Heimat New York in November 2018.

One could say this is where it all began - the liqueur that inspired Heimat New York dates back to the blackberries that grew abundantly in my Oma's garden. Fortunately we were able to source some blackberries this year after last year's crop at the farm we were working with was completely wiped out by a powerful storm in late spring. These blackberries are from the Hudson Valley, and it's great to work with a farm who understands exactly what we need. He left them on the vine a short time longer to allow them an extra bit of sweetness. We're excited to bring you our most "traditional" liqueur.
Alc. by volume: 17%
Try it with: Whiskey, Gin, Rum --Heimatny.com