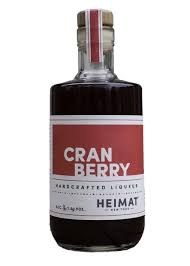 Heimat is an exciting new line of handcrafted liqueurs made in Mamaroneck, NY. Heimat New York (pronounced HI-maht) was founded by Ute Londrigan, who was born and raised in Germany and grew up amidst all the wonderful traditions that Germany has to offer. Fruit liqueurs were, and still are, commonplace in the area. Ute's grandmother made them herself from fruit in her backyard for the family's own use, typically after the afternoon's traditional coffee and cake ("Kaffeeklatsch"). Ute dabbled with her liqueurs over the years but it wasn't until she and her family moved to New York - with the wide variety of fresh fruits at her doorstep, friendly and engaging farmers, and friends who appreciated the taste and authenticity - did the idea really take off. After two years of planning, licensing, creating contacts with farmers, and a whole lot of support from her friends and family, Ute opened the doors to Heimat New York in November 2018.

One of the few fruits native to North America, cranberries grow mostly in the northern states and we are lucky to have several farms in New York. We head upstate just as the leaves begin to turn color and the farmers are busy working in the flooded bogs (like our video below!). Our cranberry liqueur is as versatile around the holidays as it is during the summer months. It's particularly noted for the balance between tart and sweet.