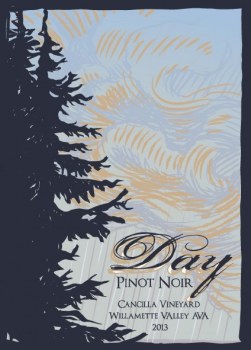 Day Pinot Noir Cancilla Vineyard is a beautiful single-vineyard Pinot from the Pacific Northwest. Day Wines is a natural wine producer in Oregon's Willamette Valley, led by winemaker Brianne Day. In 2006 Brianne sold everything she owned and began traveling through wine regions all over the world. She started her own winery in 2012 with some Pinot Noir grapes from the 15-acre, dry-farmed Crowley Station Vineyard in the Eola Amity Hills. The inaugural vintage was only 125 cases and sold out quickly. On the strength of that single bottling she was invited to the RAW fair in London and was one of only seven American wineries mentioned in Isabelle Legeron's recent book, Natural Wine, alongside Edmunds St. John and Arnot Roberts.

Cancilla Vineyard is a lovely 20-acre site, a former Christmas tree farm just north of the Yamhill-Carlton AVA in the north-western Willamette Valley. The vineyard sits close to the Coast Range, exactly halfway between Tillamook and Portland, which allows lots of access to coastal rain water. It is owned and grown (certified organic & dry farmed) by Ken Cancilla. The first vines were planted in 1999 and the vineyard was fully organic by 2009. The cool, late ripening site is situated at 500-600 feet elevation in silty clay loam soils. The fruit was 100% destemmed, all native fermentation, and aged in 18% new French oak for 11 months. 450 cases produced.