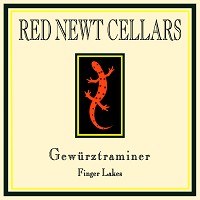 Red Newt Cellars is located on the east side of Seneca Lake in the hamlet of Hector in the Finger Lakes region of New York. Red Newt Cellars was founded in 1998 by David and Debra Whiting. Wine production was started with the 1998 vintage with a mere 1,200 cases of Chardonnay, Riesling, Vidal, Cayuga, Cabernet Franc, Cabernet Sauvignon and Merlot. The first white wines were released at the grand opening of the winery and restaurant in July of 1999. Debra and David have received recognition from local and regional press as well as from national publications such as Food and Wine, Nation's Restaurant News, and Wine Spectator. Red Newt Cellars was named among Wine & Spirits Magazine's 2011 Top 100 wineries of the year!

"The 2017 Gewürztraminer, a wine Red Newt and owner David Whiting have made since the 1980s, was sourced from Nutt Road Vineyard. It comes in with five grams of sugar, 5.3 of total acidity and 14% alcohol. The winery says it is picked entirely based on flavor ripeness to bring out "a rich, dry style." Whew. This is very aromatic, classic for the grape, but invigorating in its exuberance, nonetheless. Spice, lychees and all that aromatic jazz make this a fine representation of the grape at a very nice price. It should age pretty well too (see the note on the library wine, the 2008). There were 341 cases produced." Drink 2019-2027.-Mark Squires, Wine Advocate, 90 points!