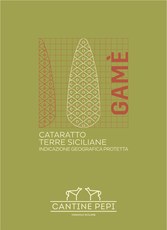 Cantine Pepi Cataratto Gamè is a beautiful new white wine gem from Sicily made from 100% Cataratto, the most widely planted white grape in Sicily. Cantine Pepi is "a 99% woman enterprise," run by women who boldly undertake the profession of the winemaker in Sicily.
The wines of Rosa Pepi and her daughter Erika come to life in Mazzarone, in the area of Licodia Eubea, in the hills along the Dirillo river. For four generations the family history has revolved around wine. The etymology of the word Gamè comes from the Arabic "Gamè" and refers to "Agata," a rare precious stone originating in Eastern Sicily.

Cantine Pepi Cataratto Gamè is medium in body, crisp and clean. Exclusively Cataratto, an ancient Sicilian vine, is used to produce this pure wine, the high acidity of which contributes to its freshness and its aroma of white flowers. Cataratto is cultivated in trellises, harvested after the twentieth of September. Its ageing capacity can reach two years. The wine was fermented in stainless steel to retain this varietal's floral profile. It is crisp and refreshing with a long, polished finish.