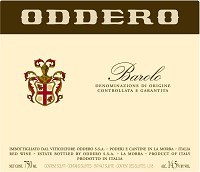 Oddero Barolo 2016 is a beautiful expression Of the Nebbioo grape from a wonderful vintage in Piedmont. Oddero is one of the great, historic, traditional Barolo houses with a long history spanning over 200 years. There are mentions of the Oddero family in La Morra as far back as the 1700s, though the family was likely there even before that point. The winery was among the first producers to estate bottle their Barolo - in the late 1800's, a time when most wine was sold in bulk either by demijohn or barrel. There are even records of their wine being sold to the USA at that point as well. It was Giacomo Oddero (born 1926) and his brother Luigi (born 1928) who brought the winery into the modern era. They renovated their ancient farmhouse, elevated their wine quality, and extended their vineyard holdings. For years, the estate has quietly sold a good portion of their wines to a loyal clientele, much of it to restaurants in Italy. As such, they have remained somewhat under-the-radar amongst the tier of traditional Baroli.

Oddero Barolo is sourced from two crus in La Morra (Bricco Chiesa & Capalot) and one in Castiglione Falletto (Bricco Fiasco), all certified organic. Grapes were hand-harvested from 65-year-old vines in the first part of October. Each cru is aged separately for 30 months in a mix of very large 40-to-75 HL casks of Austrian and Slavonian oak. In the spring, the crus are assembled into the final blend and then bottled at the end of summer. Finally, the wine spends a minimum of six months in the bottle before release.

"Oddero's classic 2016 Barolo delivers everything you seek in this beautiful vintage. The wine is linear and tight, precise and focused, showing vivid fruit, wild berry, rose hip, aniseed and grilled herb. These aromas are delivered with carefully intensity, in which you can make out each characteristic and no one element is masked or covered. Fruit is drawn from three vineyard sites: Bricco Chiesa and Capalot both in La Morra, and Fiasco in Castiglione Falletto. The balance is spot on, and so is the wine's value price. Drink 2022-2040."-Monica Larner, Wine Advocate 94+ points!