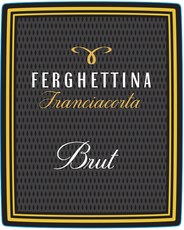 Ferghettina Franciacorta, a dry sparkling wine made of Chardonnay and Pinot Noir, is a delightful alternative to Champagne at roughly half the price! Ferghettina owes everything to Roberto Gatti's initiative, intuition and foresight. Roberto was born in Cazzago, San Martino, in 1953, to a family of farmers and vine-growers, but soon moved to Erbusco, in the heart of Franciacorta. In his youth he worked for a local farm with his father, and later as the manager of the wine cellar and vineyards for another well-known winery in the area.

In 1990, he and his wife Andreina took over the management of four hectares of land in Erbusco, where they soon created a wine cellar. After the harvest of 1991, Roberto presented his first two wines: a Terre di Franciacorta red wine and a white wine. Ferghettina was born, taking on the name of the area where the winery was built. The following year Roberto produced his first Franciacorta, a brut that's still the strongest suit of the winery.

Today the winery runs 200 hectares of vineyards located in 11 municipalities of Franciacorta, conforming to organic farming principles, in order to exploit the resources of the different soils as fully as possible, to enhance the quality of the wines. Ferghettina is a family matter: everything is managed by Roberto and Andreina, with the help of their children Laura and Matteo, both graduated in oenology.

Ferghettina Franciacorta Brut is straw yellow, fine and persistent in the mouth with notes of hazelnut, sweet fruits, and white flowers. Enjoy this sparkling wine as the perfect aperitif and with every course of a meal, including desserts.