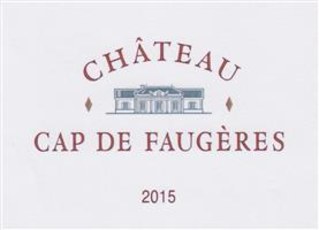 Chateau Cap de Faugeres Castillon-Cotes de Bordeaux is a beautiful red wine gem from the excellent 2015 vintage in Bordeaux. The history of Château Faugères dates back to 1550 when Faugères was a hamlet near St. Émilion, but the estate began to gain recognition when it was inherited by Pierre Bernard ("Péby") Guisez and his wife Corinne in the late 1980s. It had been in Péby's family since 1823, but he and Corinne instituted a number of changes to improve quality, and brought new attention to the estate. Péby died unexpectedly in 1997 and Corinne continued to push quality forward. In 2005 she sold the property to Swiss businessman Silvio Denz, and he has invested in further upgrades, including a new winery, and has ushered in a new era of quality. Vineyards are planted to 85% Merlot, 10% Cabernet Franc, and 5% Cabernet Sauvignon, with an average age of 35 years.

"The medium garnet-purple colored 2015 Cap de Faugeres has a ripper of a nose, featuring warm plums and baked cherries with hints of garrigue, forest floor and chargrill. Medium to full-bodied, plush and with a savory/meaty character in the mouth, it features impressive restraint and finishes on a mineral note." Drink 2018-2029-Lisa Perrotti-Brown, Wine Advocate, February/2018, 89 points!