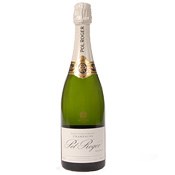 Pol Roger, one of a few luxury Champagne firms still family-owned, was established in Epernay in 1849. Pol Roger owns 200 acres of vineyards, which provide about 45% of their needs. Pol Roger's cellars extend over four miles of winding chalk passageways on two levels. The second or deeper cellar maintains a constant 9.5º C (50º F), one degree lower than the first level and most others in the region. This lower temperature slows the second fermentation, encouraging a finer mousse or bubbles. Pol Roger Champagne also spends two to three times the allowable minimum in the cellar before disgorgement, or about three years for the non-vintage and up to seven for the luxury cuvees. The long, slow maturation contributes greatly to the complex aromas, which distinguish these superb Champagnes.

Pol Roger Champagne Brut Reserve is a sparkling wine gem made from 33% Pinot Meunier, 33% Pinot Noir and 33% Chardonnay. The Brut Non Vintage blend is traditionally composed from about 30 to 35 still base wines, drawn from different vineyard sites, grape varieties and vintage years. It usually contains wines of at least two vintages, often three or four. Reserve wines compose between 20-30% of the traditional blend. The Brut NV is never sold until the youngest component is at least three years old, which gives it more character and body. After clarification of the must at 46° F (a process unique to Pol Roger) the first fermentation is carried out in neutral vessels under closely controlled temperature so as to retain as much fresh fruit character and aroma as possible. Dosage averages a low 1.25%.

Pol Roger Champagne Brut Reserve is pale gold with a very fine bead. It has a flowery, delicately toasty aroma with fruit and complexity. The wine is creamy and beautifully balanced with a dry, harmonious finish. Enjoy with all kinds of food or simply to celebrate one of life’s special moments.