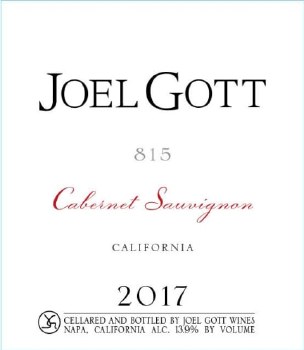 Joel Gott Cabernet Sauvignon Blend No 815 is one of those rare wines that makes you feel you must have been undercharged! The 2003 release of Blend No 815 was named in honor of Lucy, oldest daughter of Joel and Sarah, born on August 15, 2003, just in time for the madness of harvest. Food and Wine Magazine declared the inaugural 2003 Joel Gott Cab among the best finds under $20 in the October 2005 issue. Each new release has renewed our faith in Joel Gott as a truly gifted winemaker. The new vintage just released carries on the tradition of excellence.

In a very short time, Joel Gott has established cult status in California winemaking. (We still remember the buzz a few years ago when the 2000 Joel Gott Zinfandel was presented at a trade tasting in New York!) Aside from making great wines, Joel keeps his hand in several other successful businesses, including Napa Valley's hottest burger stand, Taylor's Refresher, where Robert Parker enjoyed one of his "Most Memorable Meals."

Joel Gott Cabernet Sauvignon Blend No 815 is 100% Cabernet Sauvignon, picking the best fruit from vineyards in several viticultural areas of California, including Napa Valley, Sonoma County, Lodi, Lake County and Paso Robles. Together, these appellations create a balanced, structured wine with beautiful aromatics. Rich vanilla aromas, framed by red fruit notes of plum, strawberry and cherry, fill the nose of this California Cabernet Sauvignon. Luscious Bing cherry, strawberry and raspberry flavors on the palate give way to hints of cigar box and toffee on the long, textured finish. It was aged for 18 months in American oak, 25% new barrels.