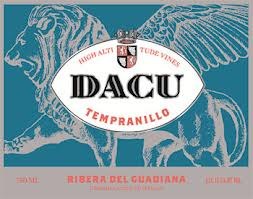 Dacu is a lovely red wine gem of 100% Tempranillo from the Ribera del Guadiana DO of the Extremadura region in southwestern Spain, bordering Portugual. Grown in limestone soils at an elevation of 2100 ft, the wine was aged for 3 months in French oak barrels. It is produced by Compania de Vinos del Atlantico, CVA, and imported by Ole Imports.

The new 2011 vintage Dacu has not yet been rated, but the 2010 received a 90-point score from Parker's Wine Advocate, making it a great value in Spanish reds. Robert Parker's description: "The 2010 Dacu spent four months in stainless steel tank as well as two months in French oak. An unexpected surprise in my tastings, it exhibits terrific wild berry/Zinfandel-like fruit, pepper, earth and roasted herb characteristics. Richly fruity, pure and heady, it is best consumed over the next 2-3 years."